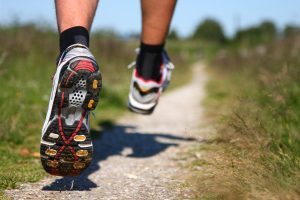 Not until I went to watch my brother-in-law, Jamie, run a marathon in the Ottawa race weekend.  While waiting for him to finish, I sat in the stands and watched hundreds of people come across the finish line.  Some were finishing with a burst of speed and frenzy, others were slowing weaving and wobbling in under the watchful eyes of first aid personnel.  Some looked sweaty and exhausted while others displayed joyful celebration with a fist pump as they crossed the line.  There were all types of bodies, slim and runner-like to stocky.  Old and young, male and female.  They were accomplishing something special.  And I was sitting in the stands ……..  I didn’t want to be in the stands.  I wanted their joy, the experience of finishing a race.  That’s when I decided I’d be running next year in this race.

My next step was to find a way to train for this and was directed to the Running Room.  There I signed up for their marathon-training program.  It was a wonderful experience.  Here’s what got me to enjoy running.  They slowed me down.  Whenever I went for a run in the past, I was pushing myself to run as fast as I could, my body was not used to running and so it became very uncomfortable.  The Running Room program got me to run with others, which was fun.  The key was to run only as fast as you could while having a conversation with someone.  That is to say, you have to run so as not to get breathless and thus experience a gasping conversation.  In running slower, my body began to change.  It got more efficient and after a while I could run a bit faster without getting breathless.  The idea is that you have to run slow to run fast.  In fact, I later learned that high performing runners do a lot of training by running slow.  Anyway, it started there.  I ran my marathon the next year and finished my race.  It was the hardest thing I ever had to do, but it was amazing too.  It’s the only marathon I’ve run to date; I prefer the half marathon distance, as I don’t have to put quite so much training in.

Here are the reasons I continue to run.

It’s efficient and cost effective.  Running is one of the most efficient forms of exercise.  For the time you put into it, you burn the most calories.  A pair of running shoes is all you need.  When I travel, I can always get out for a run.  I don’t need to find a gym.

It works well with my goal minded personality.  It’s measurable.  I try and run a couple of races each year and I can compare how well I’m doing by my finish time.  I set monthly goals for how many kms I want to run and I track them with my phone running app.  I can compare how I’m doing with my brother who also runs.  (Yes we are a bit competitive!)

It’s an important component of a healthy body.  All kinds of studies suggest running can help you live longer, provide better mental health as you age, better chances of avoiding cancer and diabetes.

It supports my other sports activities by providing a base of fitness.  I play hockey once a week most of the year and so having a baseline of fitness allows me to keep my pace up towards the end of the hour I play weekly.  I believe it reduces the chance of heart attack that we hear about with out-of-shape occasional hockey players.

It’s helped me develop some great friendships.  When I go for a run with someone we get a chance to spend uninterrupted time talking.  My current running partner is my neighbour Rob.  Running has helped us develop a great friendship.

I can do it outside.  Since growing up in southern Africa, I always have enjoyed being outside.  Running gets me outside on a regular basis.  It has helped me make friends with our Ottawa winters as I continue to run outside when the weather turns cooler.

It provides something for my kids to consider.  Just like any commitment to exercise and activity, your kids watch that and hopefully it lays a foundation of healthy lifestyle for them.  My kids didn’t really enjoy running as teenagers, but they’re coming around.  Maggie will often go with me now and Stephen has committed to running a half marathon with me this fall.